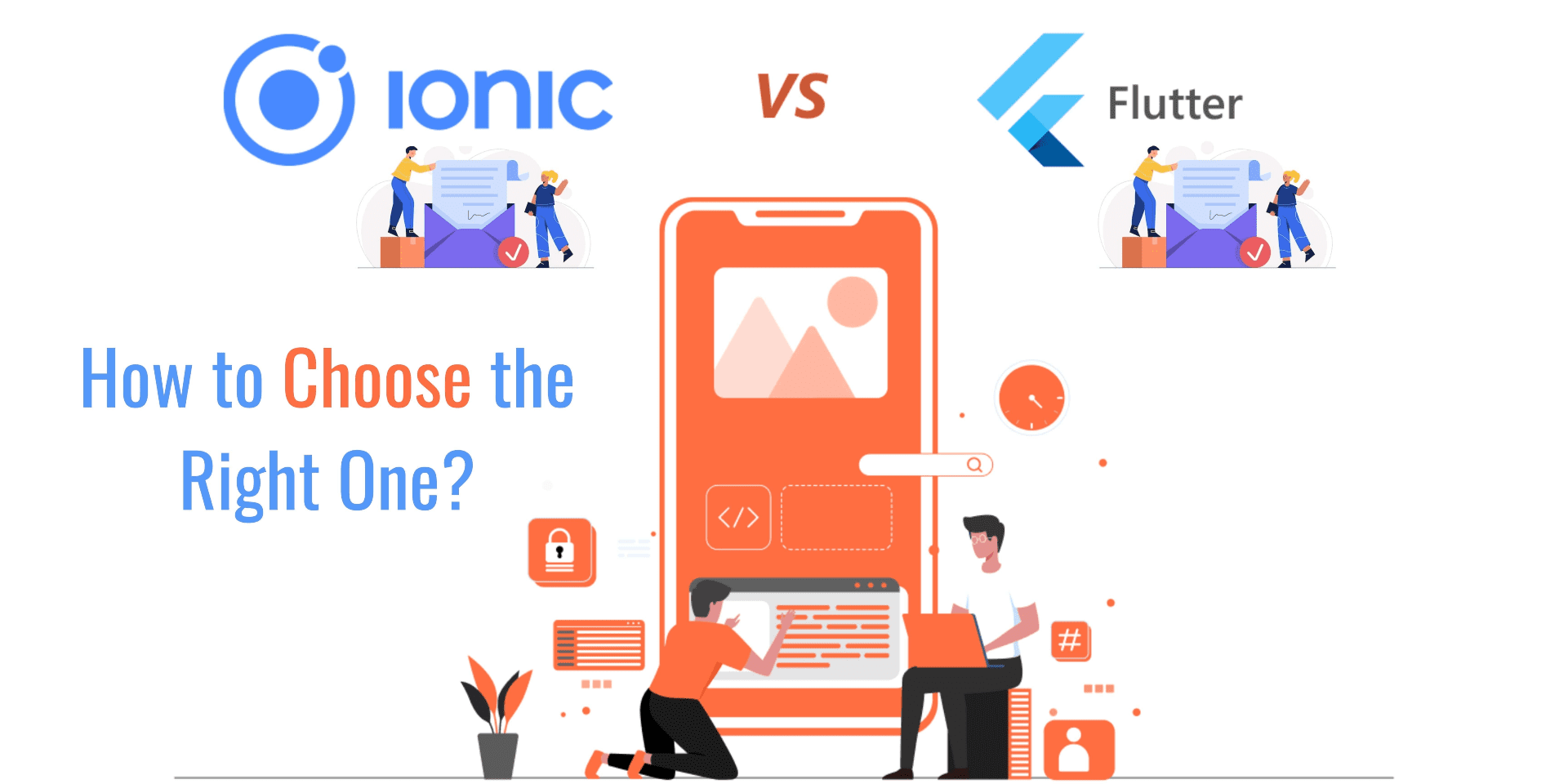 While making your first application, it can be difficult and daunting to decide from all the different options available. Choosing a mobile development framework is a tough nut to crack.

On top of that, there are many considerations that also influence the app such as,

Flutter and Ionic are the two leading mobile frameworks used to develop iOS, Android, and Hybrid apps. Both the frameworks enable developers to prototype rapidly and deliver compiled apps for mobile, web, and desktop with a single codebase. But before picking up the right one, you need to compare cross-platform app frameworks for better understanding.

This post is all about the comparison between Flutter and Ionic frameworks based on various parameters. So, let’s get going.

Flutter is Google’s brainchild created in May 2017. It is currently managed by Google with an ECMA(European Computer Manufacturers Association) standard. It is a UI toolkit that uses Dart programming language to build faster, appealing, and natively compiled hybrid applications.

According to Statista, 39% of people use Flutter to develop hybrid apps globally.

Ionic is an open-source UI toolkit that was launched in March 2014. It uses web technologies such as Javascript, CSS, and HTML to develop mobile, web, and PWA (Progressive Web Apps). Ionic mainly focuses on UI/UX and plays a significant role in the look and feel of the app.

Ionic is incorporated with other frameworks and libraries such as Cordova, Angular, etc. Moreover, it can be leveraged individually without any support of a front-end framework.

86% of developers choose Ionic for the top-notch mobile app development.

Let’s understand the key differences with some important aspects.

Ionic framework is easy to learn compared to Flutter as Ionic uses well-known programming languages like Angular and Javascript. Most of the developers are already familiar with HTML, CSS, Cordova Plugins, etc. It helps them to understand Ionic easily.

When it comes to Flutter, developers need to learn the Dart language that is completely new for them.

Almost all the developers acknowledge and use Javascript, whereas Flutter has very few developers in the market. However, Flutter is gaining a reputation among the developers’ communities.

Ionic and Flutter don’t utilize native UI components, but they update UI components’ designs automatically according to the platform on which the app is running. For Android, it is Material Design, and for iOS, it is Cupertino.

Both will enable access to native APIs and platform-specific services through pre-built plugins libraries. You can also access a set of tools to develop custom plugins as per your preferences.

The Flutter native mobile implementation is quite intolerant. So, if you are involved with custom native tasks using Flutter, you need to understand how Flutter is working with iOS and Android.

If we consider app deployment on different desktop and mobile platforms, Ionic and Flutter have strong competition.

If you need high flexibility with your device, you can opt for Ionic. Flutter is on its way to enhance web compatibility.

When it comes to the performance of both platforms, efficiency and productivity play a significant role.

The performance of Ionic and Flutter is always regarding how you write a code for both. So we can say that the quality of the code is significant if you want to decide on a framework’s performance.

You also need to consider the bundle size of your app. Ionic bundle size is 2,991 bytes as it uses standard browser runtime and the smallest processing unit. On the other hand, Flutter requires heavy code even when you want to develop basic apps.

Flutter developers need to learn Dart Programming Language. This language has a stand-alone and custom ecosystem with some limitations. That is the reason for confusion on the skills-set of Dart developers.

On the other hand, Ionic uses JavaScript. Developers can work in 100+ JavaScript frameworks with Ionic. So it can be quite complicated to grab highly-skilled Flutter developers compared to Ionic.

Flutter developers can use system technologies and Flutter libraries at no cost.

In Ionic, you can use various libraries free of cost, but if you want to accelerate the development cycle, you have to pay for a Pro Development Environment.

Flutter, as a newcomer, lacks strong community support. Whereas, Ionic has the overall support of a large community that helps Ionic app developers solve every doubt.

Despite that, with Google’s persistent efforts, Flutter may also develop a broad community in the upcoming years.

Flutter app development can be quite risky because it is a closed ecosystem. If at some point Google might think to elude the Flutter framework, the Flutter development agencies can be left with a code base and skillset only. However, there are very few chances of it but, you need to consider that scenario.

On the other hand, Ionic app development is sustainable, scalable, and relies on web standards and components. So developers can use it with any existing or future JavaScript framework.

What is Common in Flutter & Ionic?

Both frameworks are a way different but also have some similarities.

Here is a list of some popular apps built with the Flutter and Ionic frameworks.

It is always complicated to make a choice on a specific framework. Ionic and Flutter both are different in their way. This post will simplify the decision-making process if you are clear about your key objectives and market demands.

Always try to engage with the experts in whatever framework you choose.